At the weekend, Elon Musk’s commercial giant SpaceX launched two NASA astronauts in a spacecraft named Crew Dragon which, from the inside, looked like a souped-up Tesla. The Falcon 9 rocket launched the spacecraft, returned to Earth and landed on a ship to later be re-used. And the Crew Dragon eventually docked autonomously with the International Space Station (ISS).

Funding to the Australian Women Pilots’ Association (AWPA), Chief of Air Force’s Flying Scholarships, has been approved for another four years to support aspiring female pilots. Each year, two scholarships are awarded to females aged 16 to 24, who are already undertaking training for a pilot’s license. Minister for Defence, Senator the Hon Linda Reynolds CSC said the scholarships helped young women pursue an exciting and challenging career in aviation.

Australia’s defence budget in the age of Covid-19: Room for a cut?

In the first post in this series, I noted that, so far, the government remains committed to the 10-year defence funding line it presented in the 2016 defence white paper. That funding line is likely to grow past 2% of GDP. In this post, I’ll look at what effect a budget cut could have if that commitment wavers. Let’s first look at the planned trajectory of the defence budget.

ASC And Partners To Pioneer Additive Manufacturing For Submarines

Australia’s dedicated submarine sustainment organisation, ASC, is collaborating with Australia’s national science agency, CSIRO, and DMTC Limited, to pioneer the use of additive manufacturing for the repair of Collins Class submarines. The partners have joined forces to further develop ‘cold spray’ technology for repairing damaged metal surfaces, to enable the future in situ repair of submarine components.

The US Air Force (USAF) is asking aerospace manufacturers for experimental ideas to use in its future long-range air-to-air missiles. The ideas could be incorporated into missile designs that come after the service’s current Raytheon AIM-120 Advanced Medium-Range Air-to-Air Missile and the in-development Lockheed Martin AIM-260 Joint Advanced Tactical Missile.

Cubic Corporation (NYSE: CUB) today announced Cubic Defence U.K., which operates within its Cubic Global Defense (CGD) business division was awarded a contract worth more than $35 million, to continue its support for the training of the British Army. The three-year contract is for support and repair of the Area Weapons Effects Simulator (AWES) System at Salisbury Plain Training Area (SPTA) in the United Kingdom and at British Army Training Unit Suffield (BATUS) in Alberta, Canada.

The Trump Administration has sent a notification to Congress confirming plans to sell $500 million in weapons to Saudi Arabia in an upcoming round of sales. The plan would include sales of Paveway bombs to the Saudis, and licenses to Raytheon to let them manufacture the bombs directly in Saudi Arabia. These bombs are part of a 2019 deal in which the Saudis intend to buy 60,000 precision munitions.

Bureaucracy standing in the way of a merited honour

The Honours and Awards Tribunal was asked by the current government to consider the self-less and extraordinarily brave actions of Ordinary Seaman Teddy Sheean on the HMAS Armidale in December 1942. That the Prime Minister has seen fit to ignore the recommendation of his own tribunal is most disappointing . Members of the Tasmanian Vietnam Veterans Association of Australia, many teenagers themselves when they were sent to fight for their country, were witnesses to many acts of bravery during their time in Vietnam.

The Coming of the Air Warfare Destroyer to Australia: A Key Maritime Kill Web Building Block

Recently, the third and final Air Warfare destroyer, appropriately named HMAS Sydney was commissioned into the Royal Australian Navy. This was a very significant moment on many levels for Australia and for its allies in the Asia-Pacific region. For this is not just about what a single Air Warfare destroyer capable of doing; it is about what it can do when operating as part of the broader maritime kill web, either to defend Australia out to its first island chain,...

WILLIAMTOWN TO BE DEFENCE AND AEROSPACE HUB

The New South Wales government has announced the area around Williamtown air force base will be the state’s fifth special business activation precinct. Deputy premier John Barilaro said the area will turbocharge the region’s growth as a national and international defence and aerospace hub. The NSW Government will define 10,000 hectares around the Port Stephens local government area, including Newcastle Airport and surrounds.

General Dynamics Ordnance and Tactical Systems, a subsidiary of General Dynamics, was awarded a $3,4 billion contract by the U.S. Army Contracting Command on 29 May for Hydra 70 rockets. The contract, announced Friday by the Department of Defense, covers production and engineering services for Hydra-70 rocket systems. Bids were solicited via the internet with one received.

Defense companies Leonardo and Thales have successfully tested the Martlet Lightweight Multirole Missile (LMM). The Thales-built missile being developed for the Royal Navy was fired during air trials from April 27 to May 7, 2020 from a Leonardo AW159 Wildcat helicopter as part of the UK Ministry of Defence's Future Anti-Surface Guided Weapon (FASGW) program.

Details
Written by SLDinfo.com
Category: Department of Defence
Published: 29 May 2020 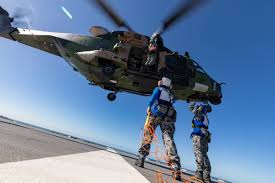 One of the challenges facing the future use of the HMAS Canberra is the evolving nature of the threat in the region, which undoubtedly see the evolution in the ship’s capability to work with other air and maritime assets to work sea control missions as well as embarkation missions as well.  This is a work in progress for sure.

Meggitt Training Systems announced today it has been awarded a US $1.8 million contract for 73 additional BlueFire® EF88 assault rifle wireless virtual weapons to be used by the Australian Defence Force (ADF) on its Weapon Training Simulation Systems (WTSS), also delivered by the company as a program of record. These latest EF88 weapon simulators will be used at several ADF bases throughout the country with all deliveries to take place in the first half of 2021.

Are Australians paying for secret US weapons tests at Woomera?

Australian taxpayers will fork out close to $1 billion for the Woomera Range Complex upgrade, used by the ADF, the US and UK. With revelations that the US military denies Australia access to computer source code needed to operate key components in our war-fighting equipment, Michelle Fahy investigates the real beneficiaries of the secret test range.

The Townsville economy is receiving a $40 million boost through Defence works at RAAF Base Townsville, highlighting the success of the Morrison Government’s local procurement policies. Minister for Defence Industry, the Hon Melissa Price MP, said the new facilities for Defence’s CH-47 Chinook helicopters are being constructed using local companies and employees.

Babcock Australia and Bell have announced that they will be teaming for the Special Forces helicopter requirement under Land 2097 Phase 4 with the Bell 429 Global Ranger with COTS based solution. Babcock will be leading the customisation program to meet the capability. Babcock Australasia’s Managing Director – Land, Graeme Nayler, said the Bell 429 Global Ranger was assessed to be the most suitable helicopter in response to the evolving needs of the ADF.

The U.S. Air Force announced last month that it plans to continue development of a new fleet of nuclear air-launched cruise missiles (ALCMs) with Raytheon Co. as the sole contractor. “After an extensive evaluation of contractor programmatic and technical approach during…preliminary design reviews, the Air Force decided to focus on Raytheon’s design,” according to an April 17 service press release.

Parliament’s Portfolio Committee on Defence and Military Veterans has raised alarms about the deteriorating abilities of the South African National Defence Force (SANDF). In a presentation on Wednesday (27 May), the committee said that it is concerned that the defence force is fast losing its capabilities, owing to successive budget cuts.